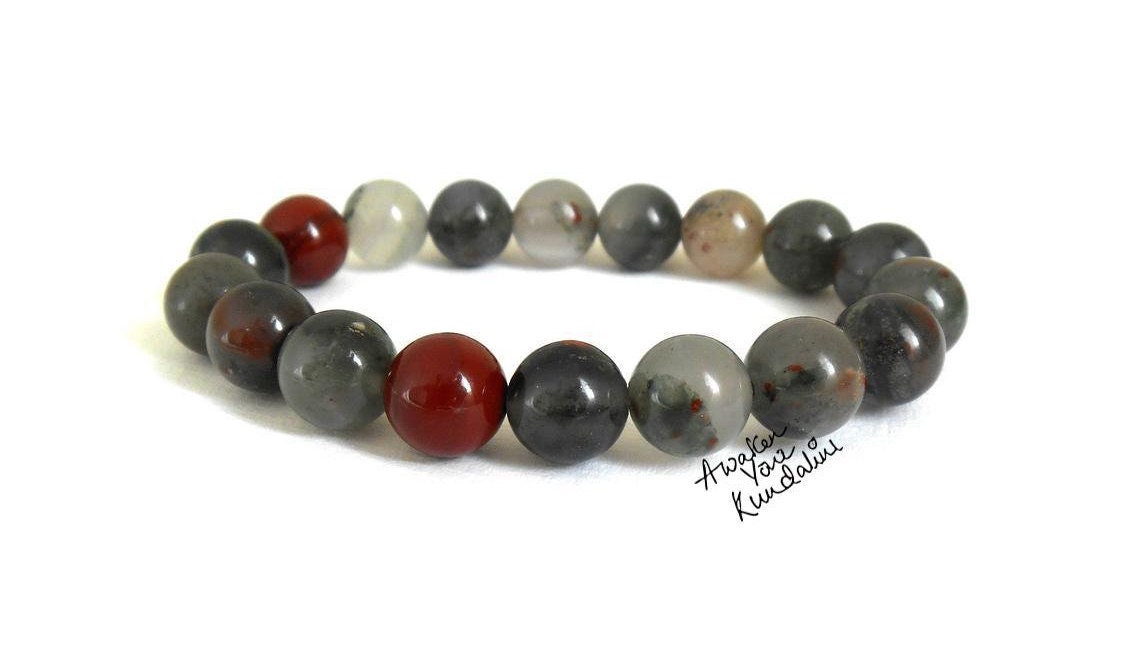 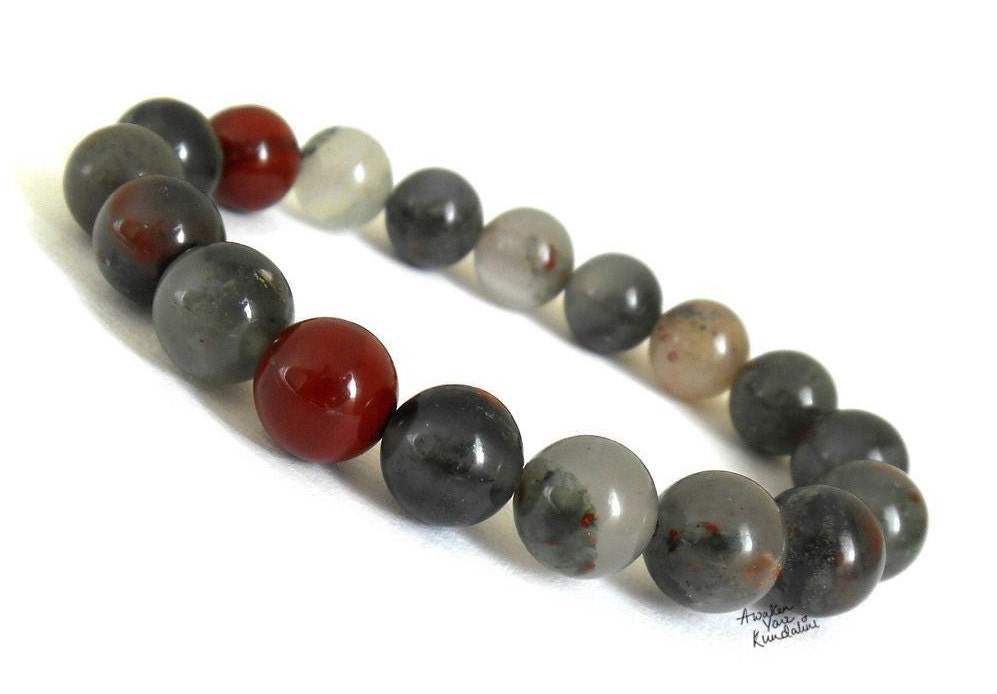 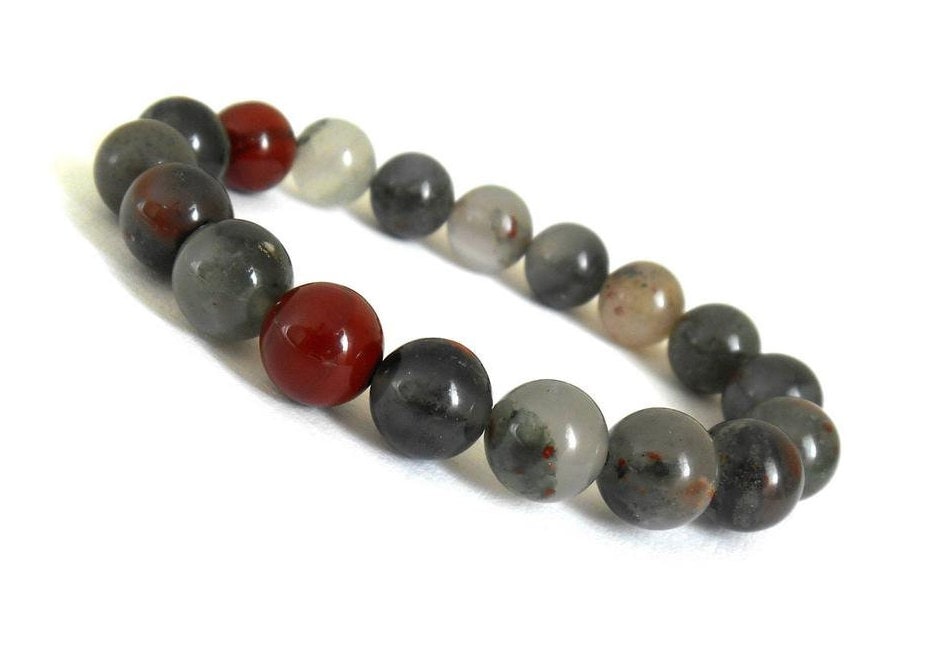 There is a legend that says the bloodstone was formed from the blood of Christ dripping on the green earth and solidifying. It was also called heliotrope by the Greeks and was thought to bring change. The bloodstone has been used as an amulet to protect against the evil eye. Bloodstone is the symbol of justice.

Healing properties of bloodstone
The bloodstone is used for circulation of all energy in the body and helps to remove energy blocks. Bloodstone is used in the alignment of all the centers of the body. A healer must do this alignment while the patient lies on his stomach. It also aids in the circulation of blood. It is good to have several pieces of Bloodstone in the home to increase the flow of life energy.

Sources of bloodstone
Locations where bloodstone can be found include India, Brazil, China, Australia, and the United States.

Bloodstone is also referred to as heliotrope in Greek which simply means sun turning. Many believed that the sun turns red when this stone is immersed in water. Polished stones were escribed to reflect the sun. Bloodstone comes with dark green color with spots of red almost resembling droplets of blood. It based its name from the stone’s appearance.


Bloodstone is sometimes referred to as Blood Jasper in the market. It is not really jasper, but more of a dark green Chalcedony which includes a mixture of red to brown. It appears to be glassy to waxy with an inconsistent color as the green color is derived from chlorite particles, while the red spots are caused by iron oxide.

Bloodstones are a variety chalcedony, which is crypto crystalline quartz. This simply means that these crystals are too small that it cannot be distinguished from the naked eye. One can determine the crystallinity through the use of an electron microscope. Note that there are two forms of bloodstone – the plasma and heliotrope. Heliotrope is transparent and has red in it. Plasma is deep green, opaque with little or no red in it.

A good quality bloodstone comes with solid dark green color with visible veins of red. This gemstone is a traditional March birthstone along with aquamarine. It comes in many shapes and cuts with the common forms of cabochon, cushion cut, emerald cut, octagonal, oval and round.

Bloodstones used in jewelries are coated with polish that magnifies the gemstone’s beauty. This also means to never apply harsh chemicals like detergents when cleaning bloodstone jewelry as it ruins the surface. Where to find these are in Australia, Brazil, Czech Republic, China, Germany, India, Russia, Scotland, and the United States.

Traditional Beliefs of Bloodstone
Bloodstones were believed to be a magical stone in ancient times. Touching the stone simply stopped hemorrhages. Ancient warriors carried with them bloodstone amulets for reasons to stop the bleeding whenever they had wounds.

In the middle ages, Babylonians used engraved bloodstone in their divination. Together with the ancient Egyptians, they used the stone to defeat magically their enemies. They employed the stone’s abilities by increasing personal strength. This was also believed to make one invisible when they wanted others to focus elsewhere. This is also known as the Mother Goddess stone associated with the Isis, Horus and the Black Madonna images.

It was also believed that bloodstone had special powers for reasons that as it was formed when drops of blood fell and stained jasper at the foot where Jesus was crucified. It was dubbed the “Martyr’s Stone” as it was used in sculptures representing martyrdom and flagellation.

Healing Properties in Bloodstone
Because of its great healing powers, these stones were pulverized and mixed with egg whites and honey. An innovation believed to heal tumors and stop bleeding. The medieval used this stone to remove poison from venomous snake bites. Bloodstone also helps in the forecast through weather magic. Athletes who require added strength also use this as a powerful charm. It clarifies vague thoughts and dispels perplexity providing several benefits.

Bloodstones are also known as stones of courage. It improves physical strength, enhances self-esteem and self-appreciation, and calms anxiousness. It promotes love for family and enhances wealth by improving the business and its legal matters.

The bloodstone also fights evil and prevents jealousy. It boosts your spirit and adds longevity. It eases a broken heart and brings good fortune. Whenever the stone becomes blood red in color, this signals the wearer about any upcoming danger. And up to this day, powdered bloodstone is used as aphrodisiac and traditional medicines in India.

Bloodstone also enhances creativity and intuition. Bloodstone drives away the negative environmental energy, which helps in the overcoming of influences like electromagnetic or geopathic stress. It revitalizes and induces dreaming. It gives you courage and helps you avoid harmful situations. This also promotes idealism and selflessness. . This soothes and revitalizes the mind, enhances decision making, and eliminates confusion. Bloodstone minimizes aggressiveness, impatience and irritability.

Bloodstone provides physical aid in treating anemia, blood disorders and enhancing blood flow. It strengthens the immune system and detoxifies. It eases menstrual and menopausal symptoms. And it strengthens the heart, liver, kidneys, intestines, and bone marrow. It minimizes pus formation, neutralizes toxins in the body, and invigorates the lymphatic system, which leads to the healing of infections and inflammations. However, stone therapy should never replace medical treatments. It is there to enhance a person’s health and well-being.