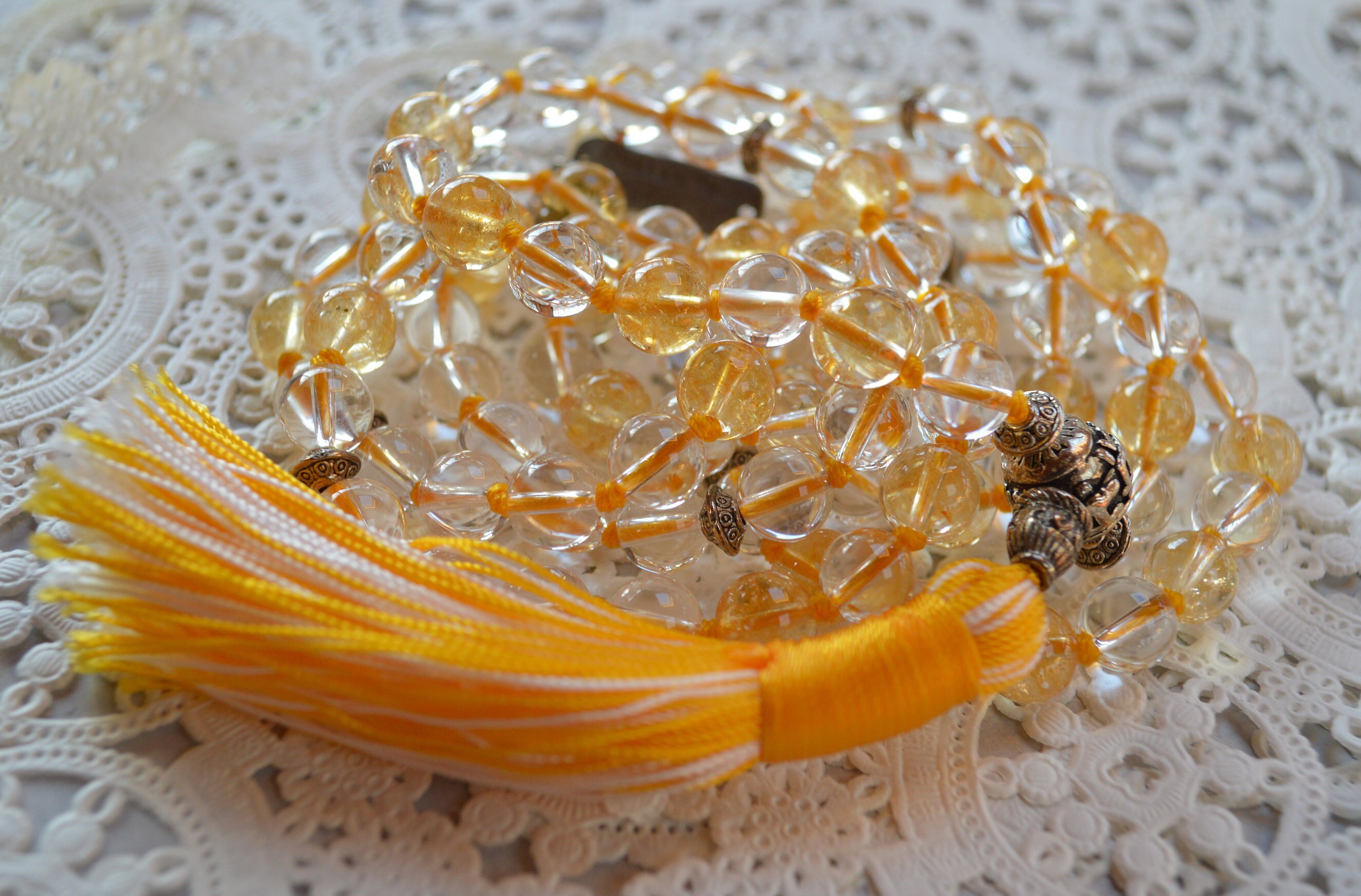 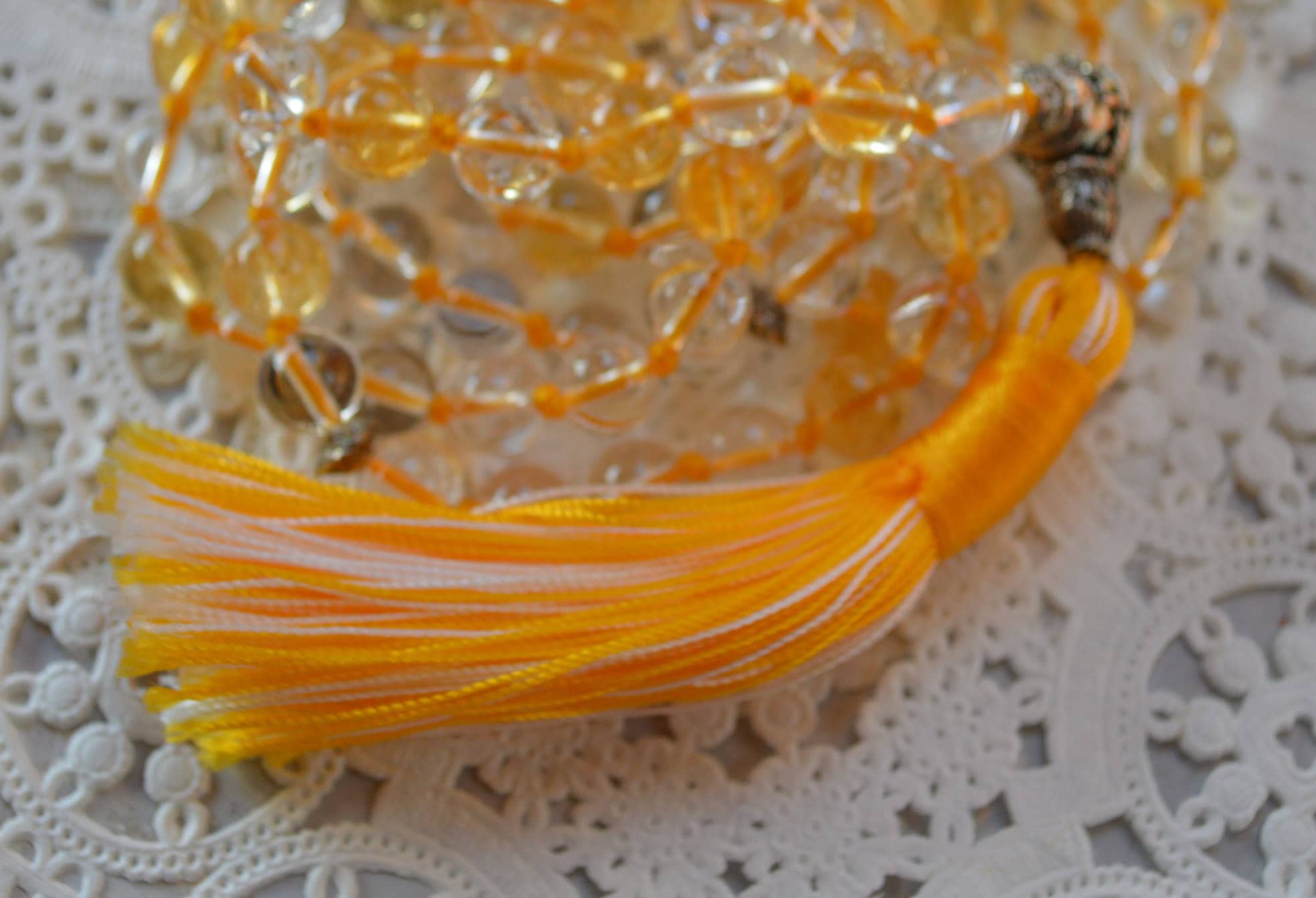 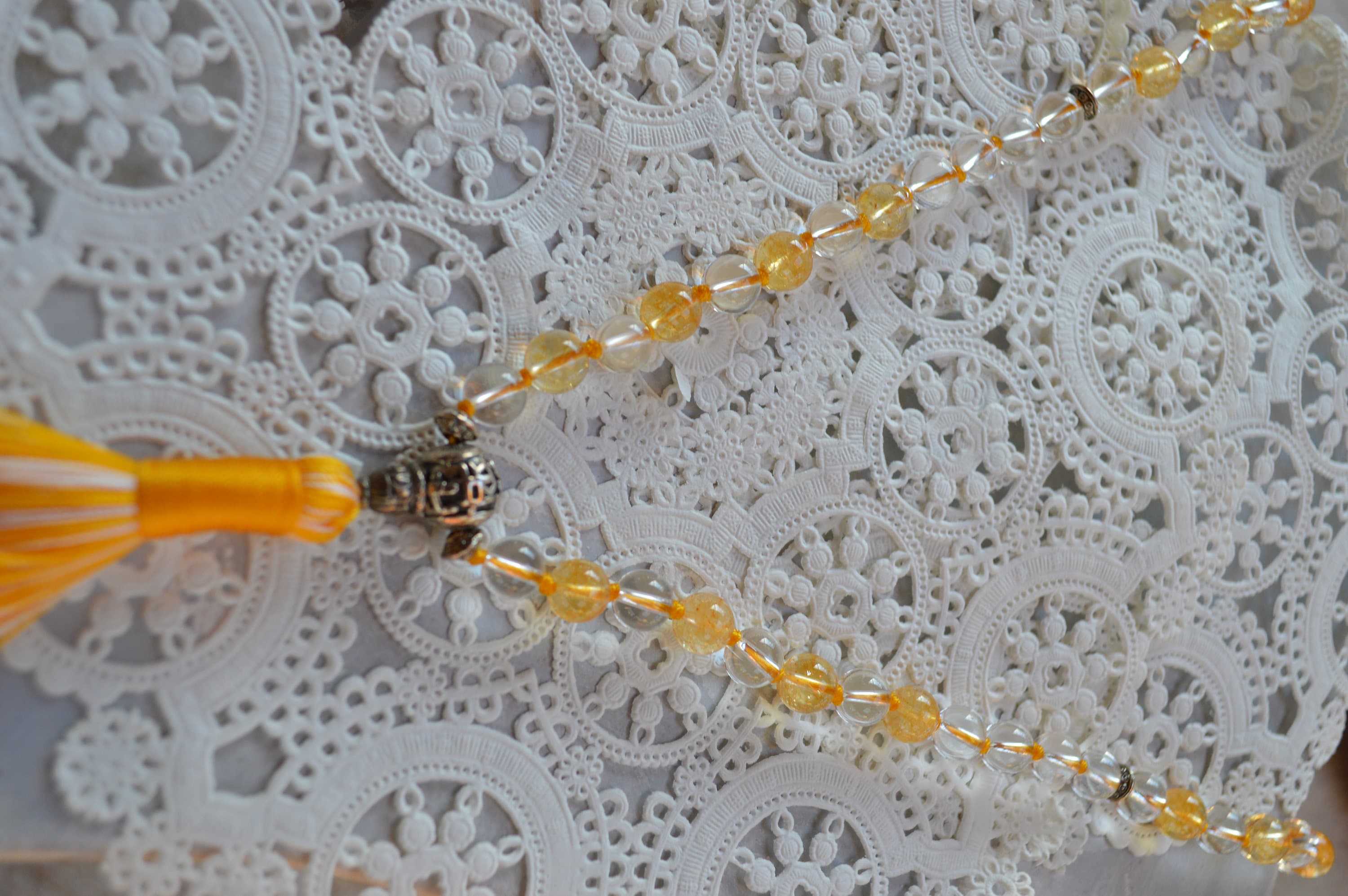 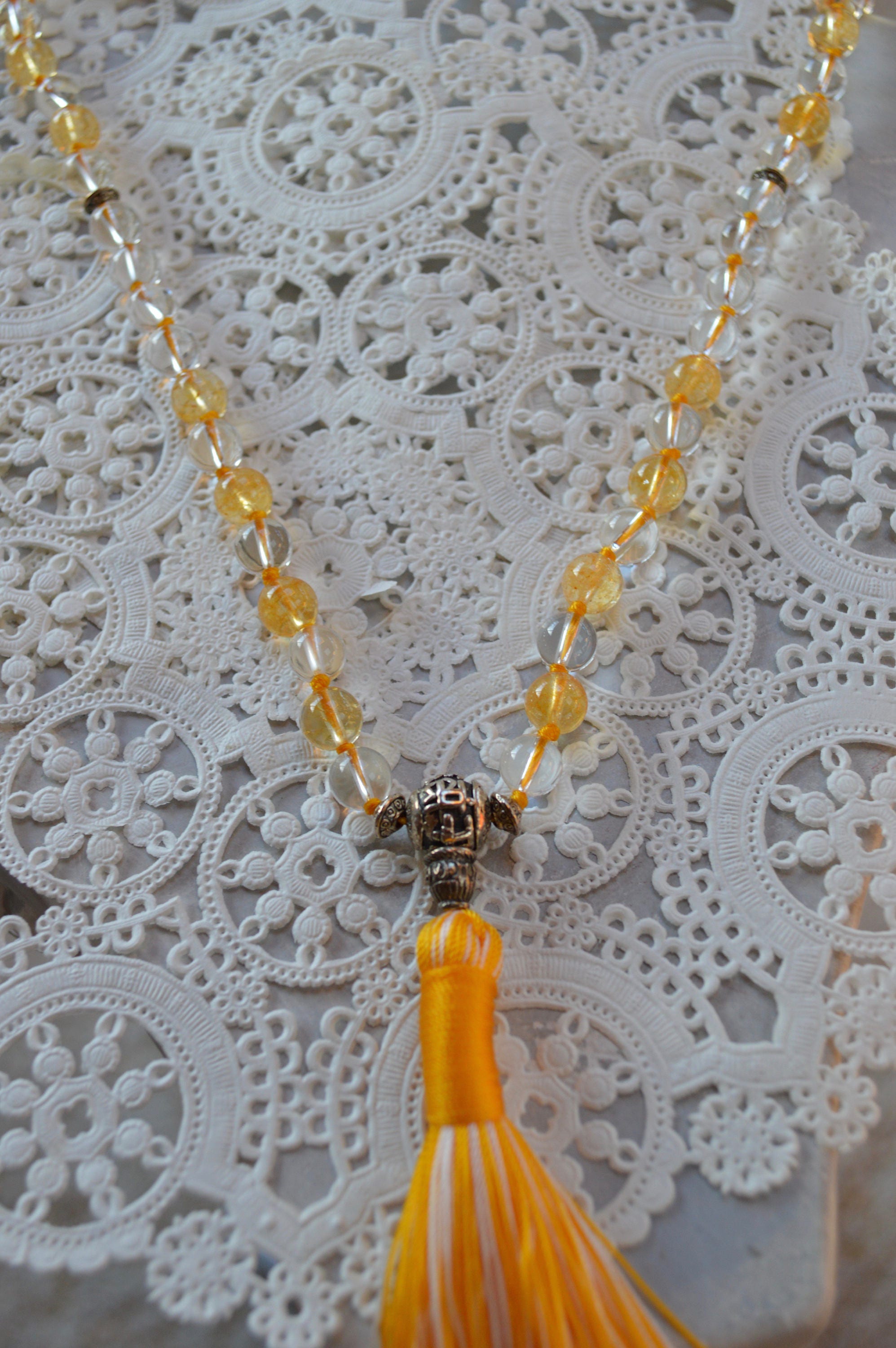 GEMSTONES OF BEST QUALITY FROM DIFFERENT PARTS OF THE WORLD, STRUNG TOGETHER FOR YOU TO GET BEST BENEFITS.

VERY VERY EXCLUSIVE MALA. TOOK NEARLY 6 MONTHS OF KNOWLEDGE AND STUDY TO WORK OUT THE BEST COMBINATIONS OF GEMSTONES. ONE OF A KIND MALA. YOU WILL FEEL THE DIFFERENCE IMMEDIATELY WHEN YOU WEAR IT.

THIS MALA IS BLESSED & ENERGIZED WITH PROPER MANTRAS, PUJA AND SPIRITUALLY ACTIVATED BY SWAMI (GURU)JI TO INFUSE POTENCY AND POWER.

Citrine is an empowering crystal with highly vibrational positive energy and a stone of abundance. It teaches us how to manifest our desires and attracts wealth and prosperity, success and all good things into life. It is a happy and generous stone that encourages sharing what you have, yet helps you hold on to your wealth. A great energy recharge, it revitalizes the mind and is helpful for people who have difficulties concentrating. It is excellent for overcoming depression, fears and phobias. When used for meditation it energizes the solar plexus empowering our body and mind.

Citrine is a very powerful, energetic and cleansing crystal which attracts and gives abundance and success to those that ask for it.

Combined with the qualities of Quartz, Citrine is powerful for awakening clarity and an intense determinate focus. Its powerful energy removes blockages and limitations, replaces laziness and lack of motivation with strong and unfailing determination.

Citrine's sun-like qualities emanate strength and vibrancy, which strengthen vitality and make it an exceptional companion for spiritual development & transformation.

By its ability to activate the solar plexus, the seat of the will, it will help you to be decisive about what you will bring into your life.

This is an exceedingly beneficial stone, that brings through energy to all of the lower three chakras. In addition it will open up the third eye chakra and aid you to think more clearly.


If you check the list of birthstones by month you will notice that Citrine is a November birthstone as well as a June birthstone.


WHAT IS CRYSTAL QUARTZ JAPA MALA?

Quartz Crystal is a power stone. It is also called by different names like Saptik, Sphatik in Indian (Hindu) religion. It has been called the "Universal Crystal", and is the most recognized type of crystal. According to Astrology it is related to Planet Venus. It has the same qualities as the diamond and therefore it can be easily worn without hesitation. Wearing a crystal mala ensures a sound and undisturbed sleep. This Crystal Mala should be used to pacify the malefic effects of Planet Venus or to strengthen this planet in ones Horoscope. Quartz enhances energy by absorbing, storing, amplifying, balancing, focusing and transmitting. Quartz also enhances thoughts, as they are a form of energy. Quartz is a stone of clarity which dispels negativity and clears away negative energy. It can be used to purify and clarify on the spiritual, mental, and physical planes. Quartz enhances spiritual growth, spirituality and wisdom. It can also help particularly with concentration, studying, and retaining what one learns. Quartz is also a stone of harmony because it balances energies, and is even helpful in romantic relationships. Psychically, quartz is a powerful stone. It is used for protection because it counters black magic and protects from negative energy. Quartz is very useful on the third eye chakra for clarity of psychic vision, and can be used to communicate with spirits and other worlds. Quartz is a stone that can access ancient wisdom and bring it into the present. It is said to draw out pain. Quartz fortifies and strengthens all systems of the body. Quartz is reputed to be particularly effective for chronic fatigue, arthritis, bone injuries, depression, fibromyalgia, intestinal troubles. Clear quartz is associated with the Crown Chakra, but also works effectively to balance and energize ALL Chakras.