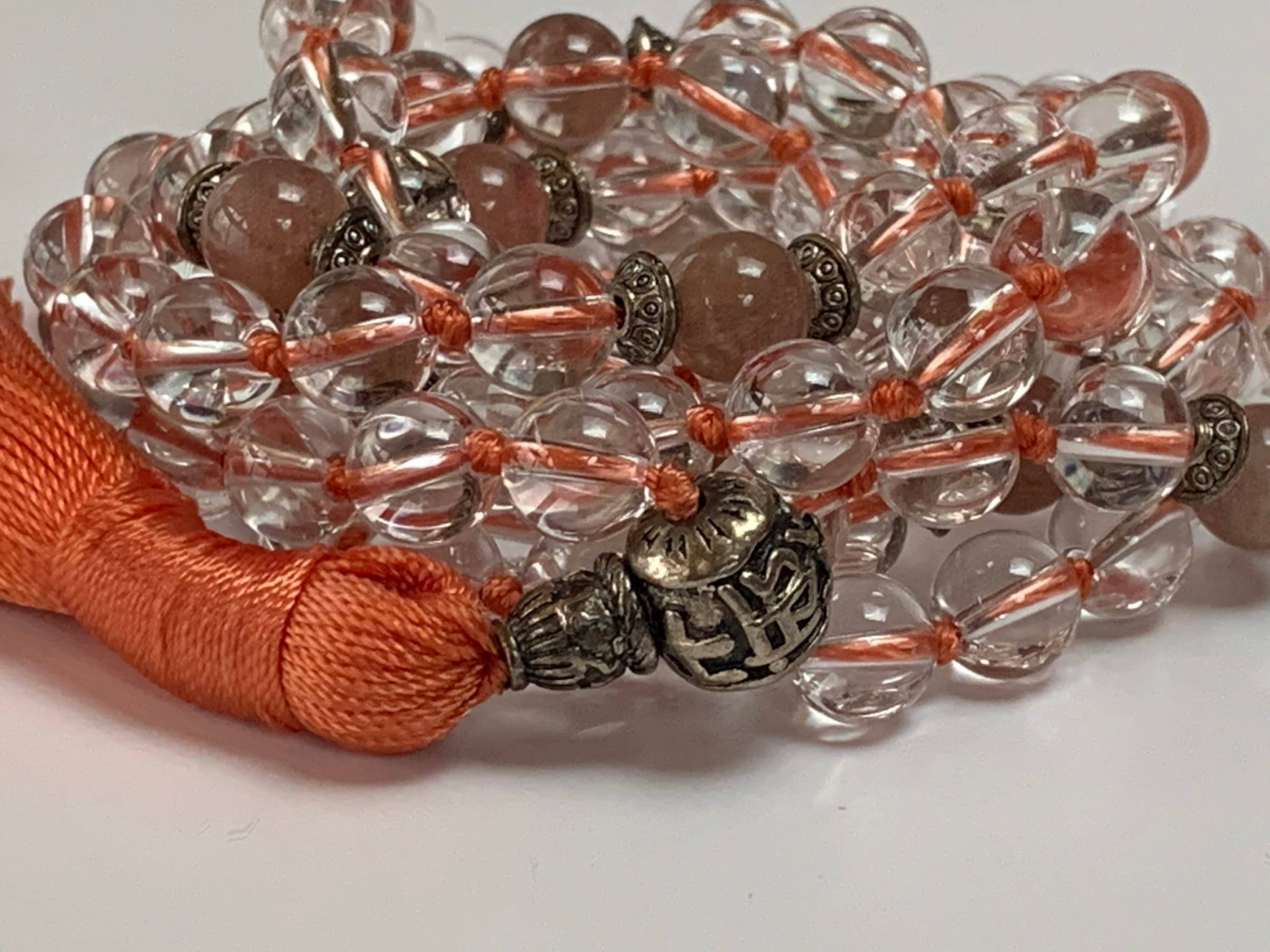 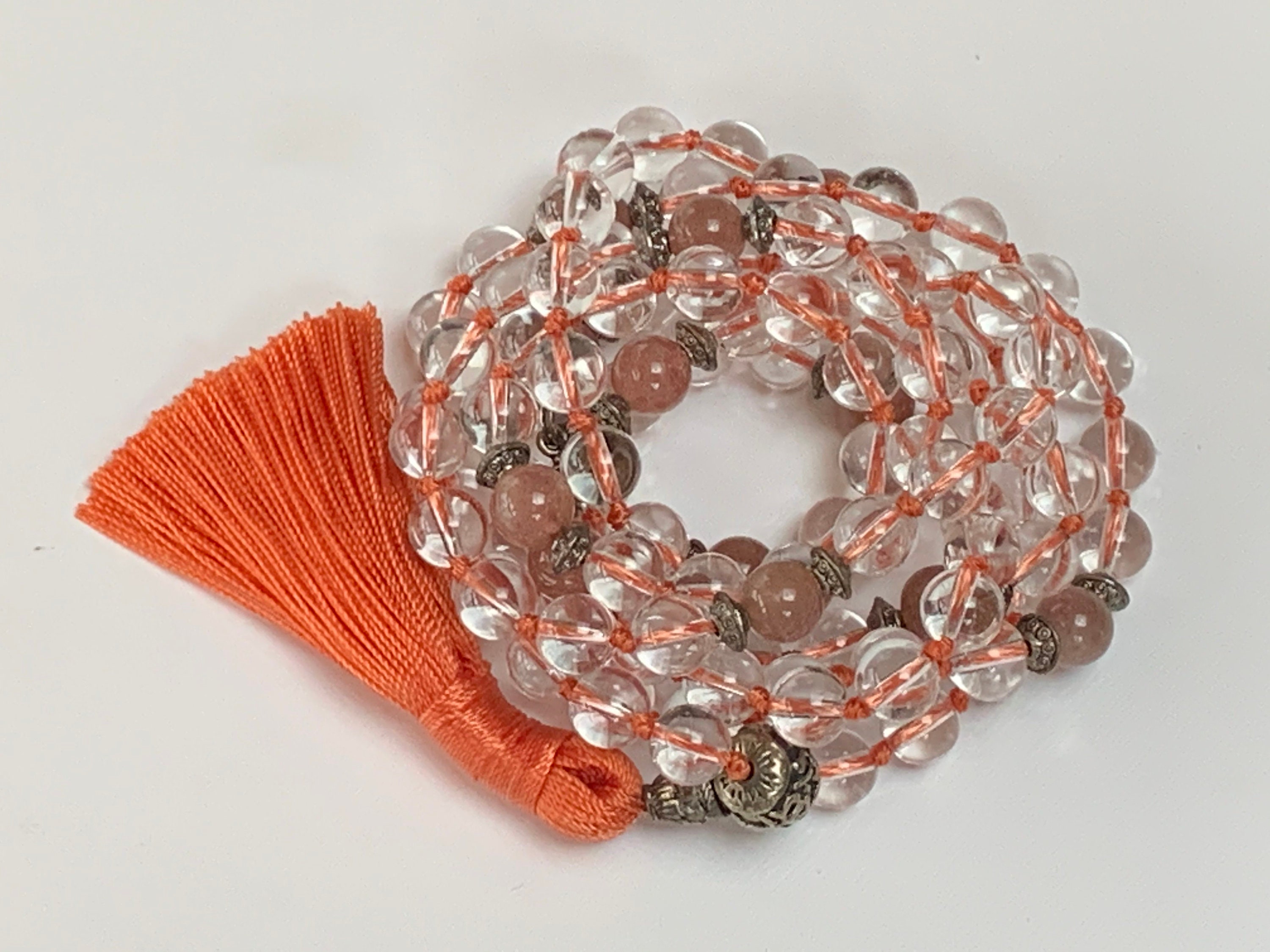 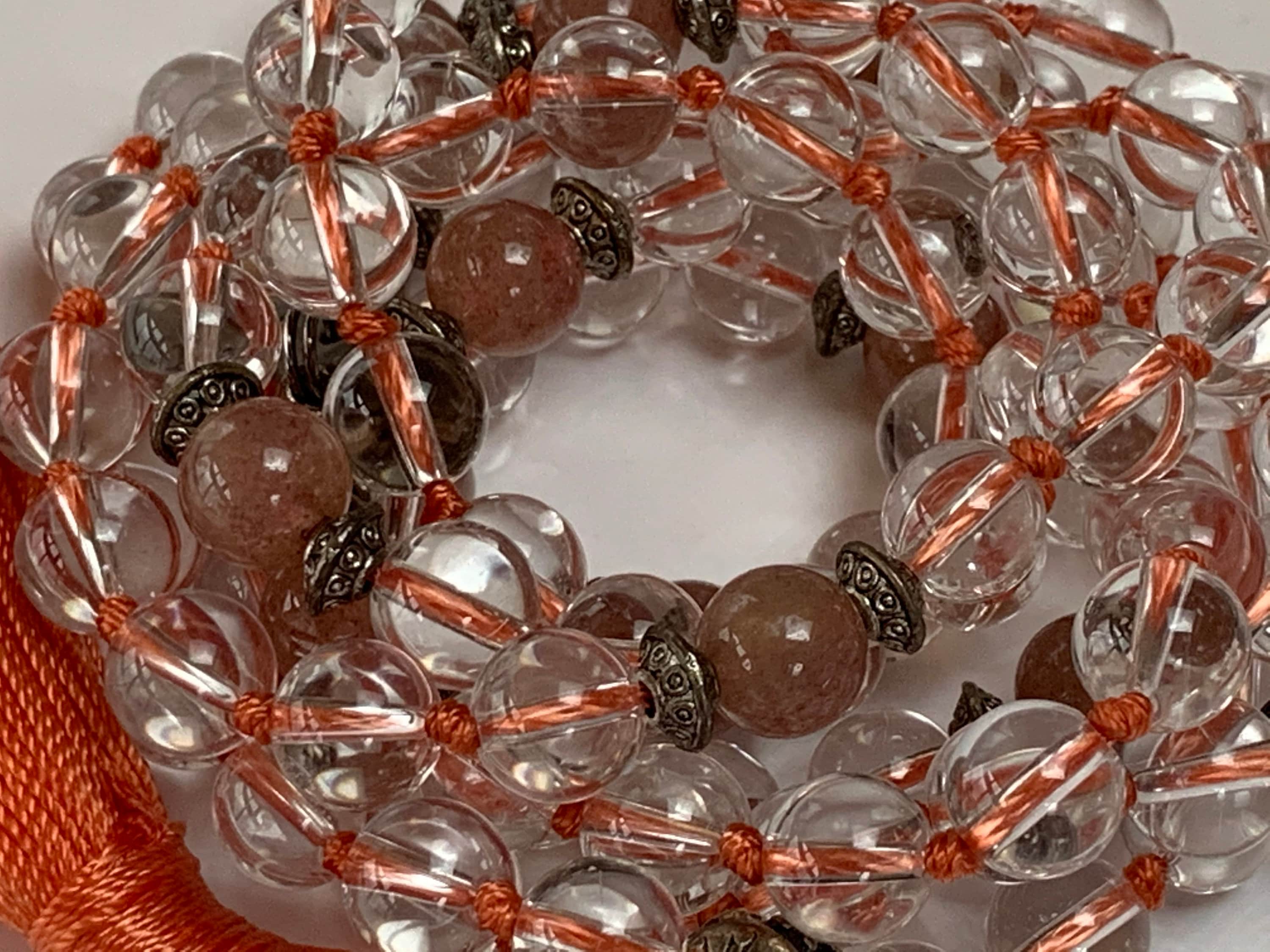 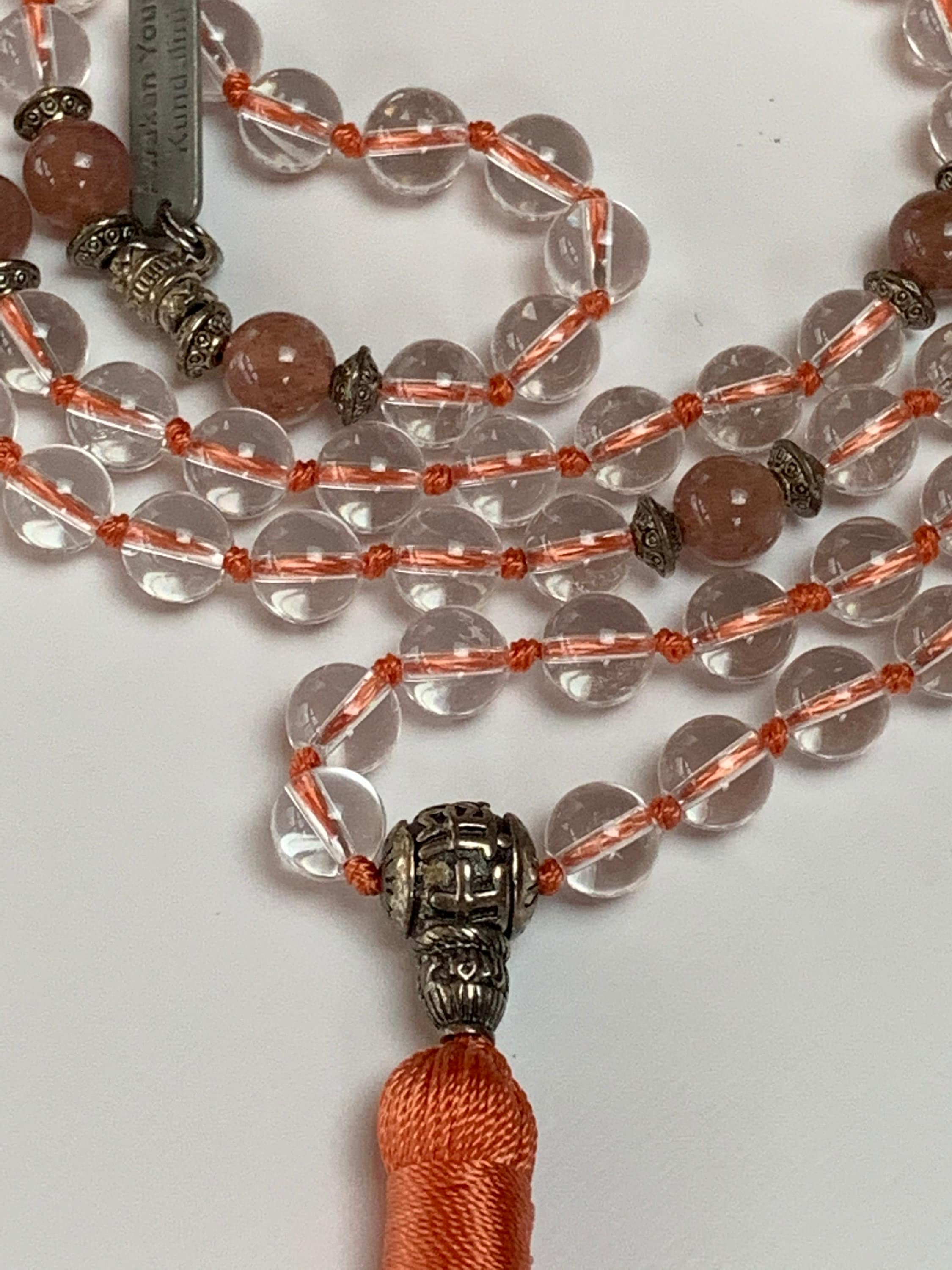 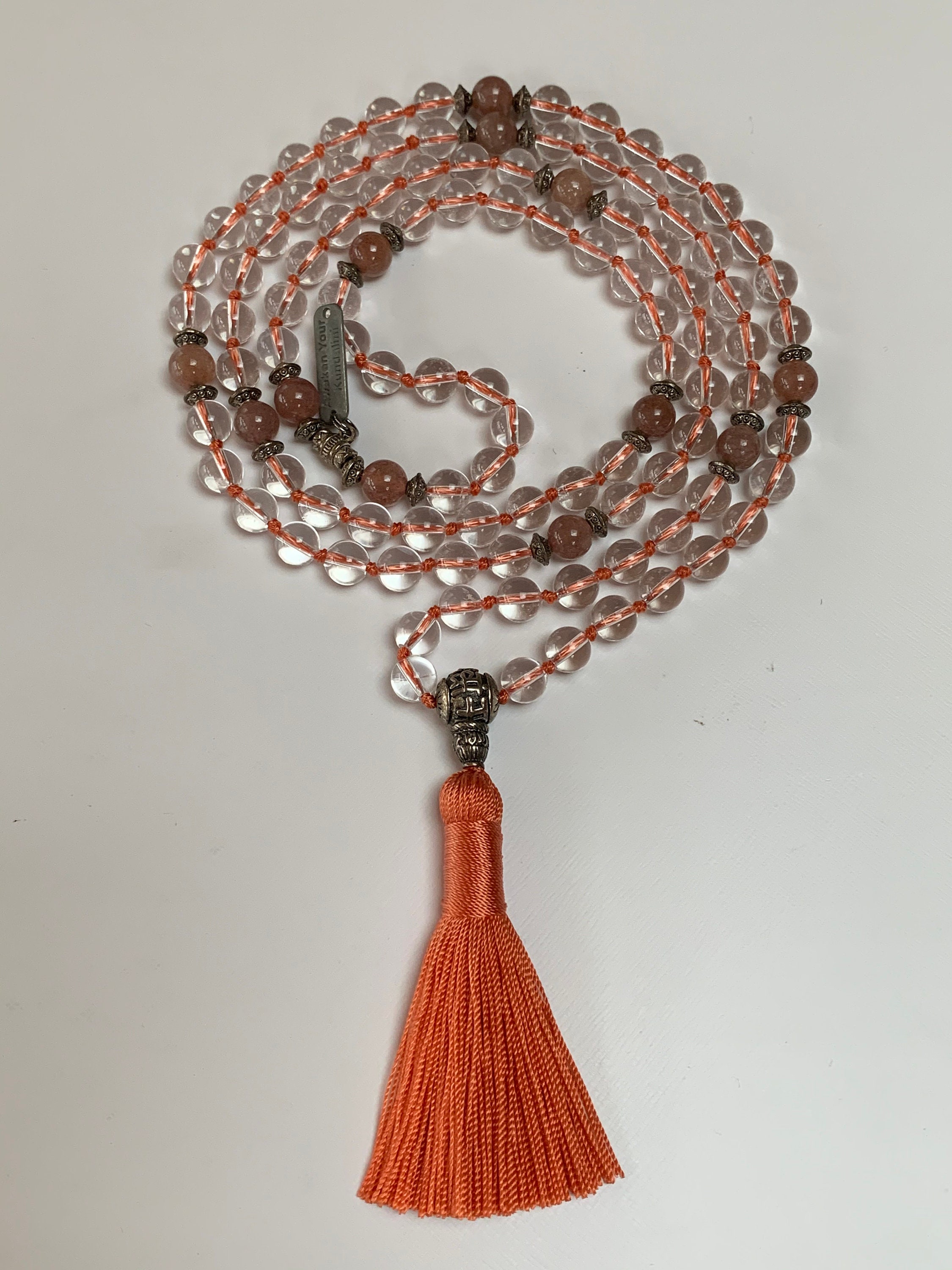 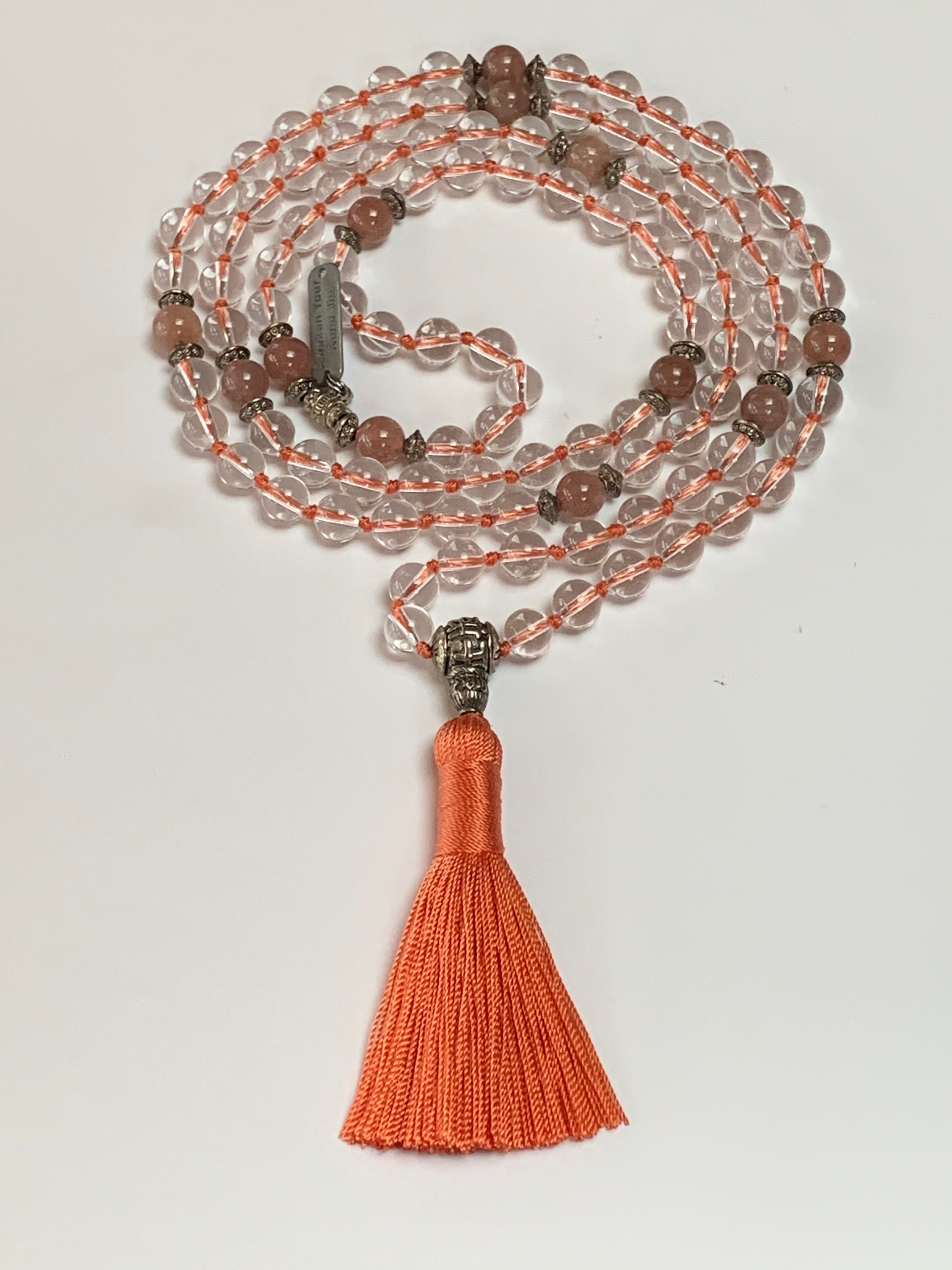 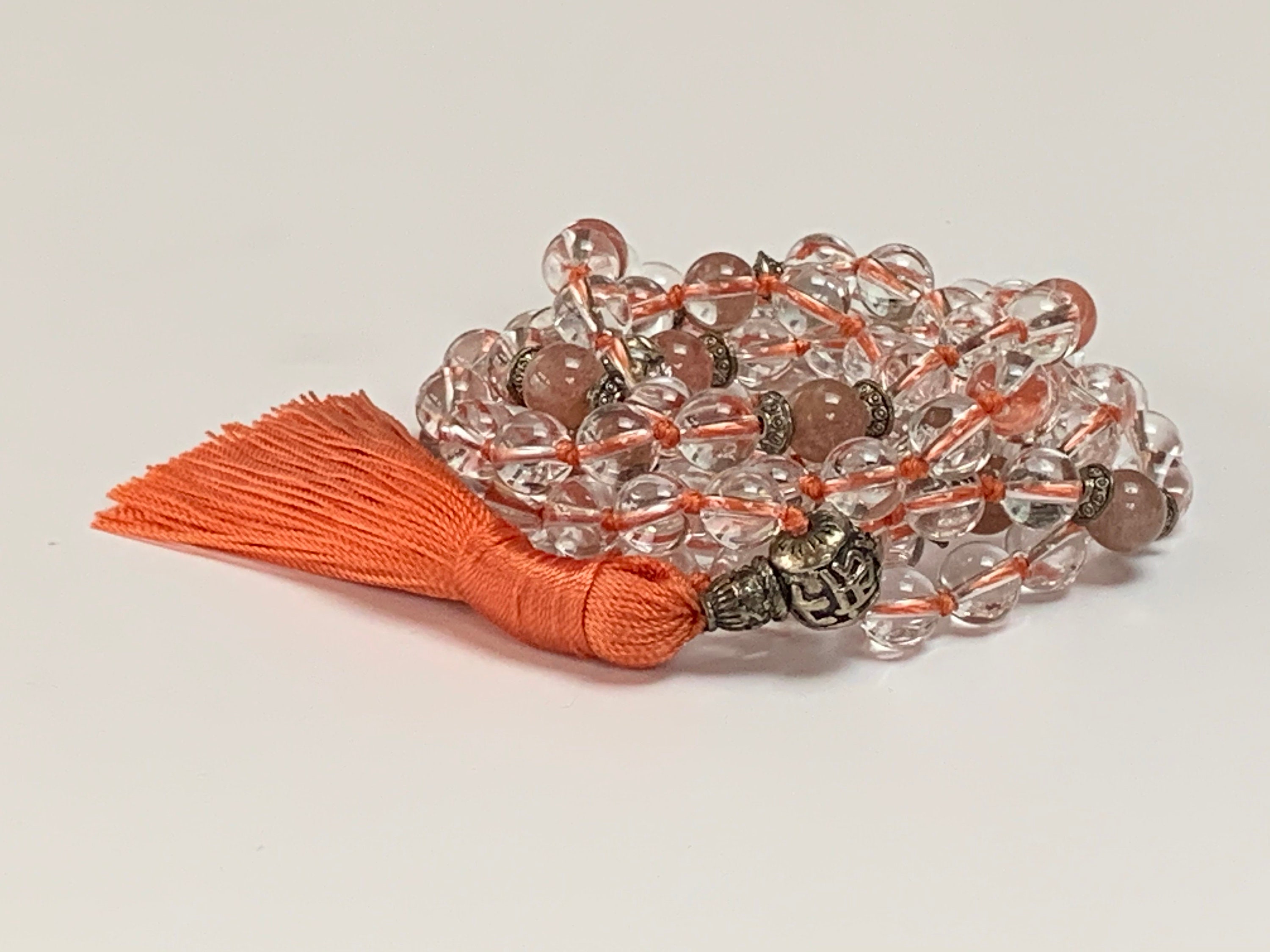 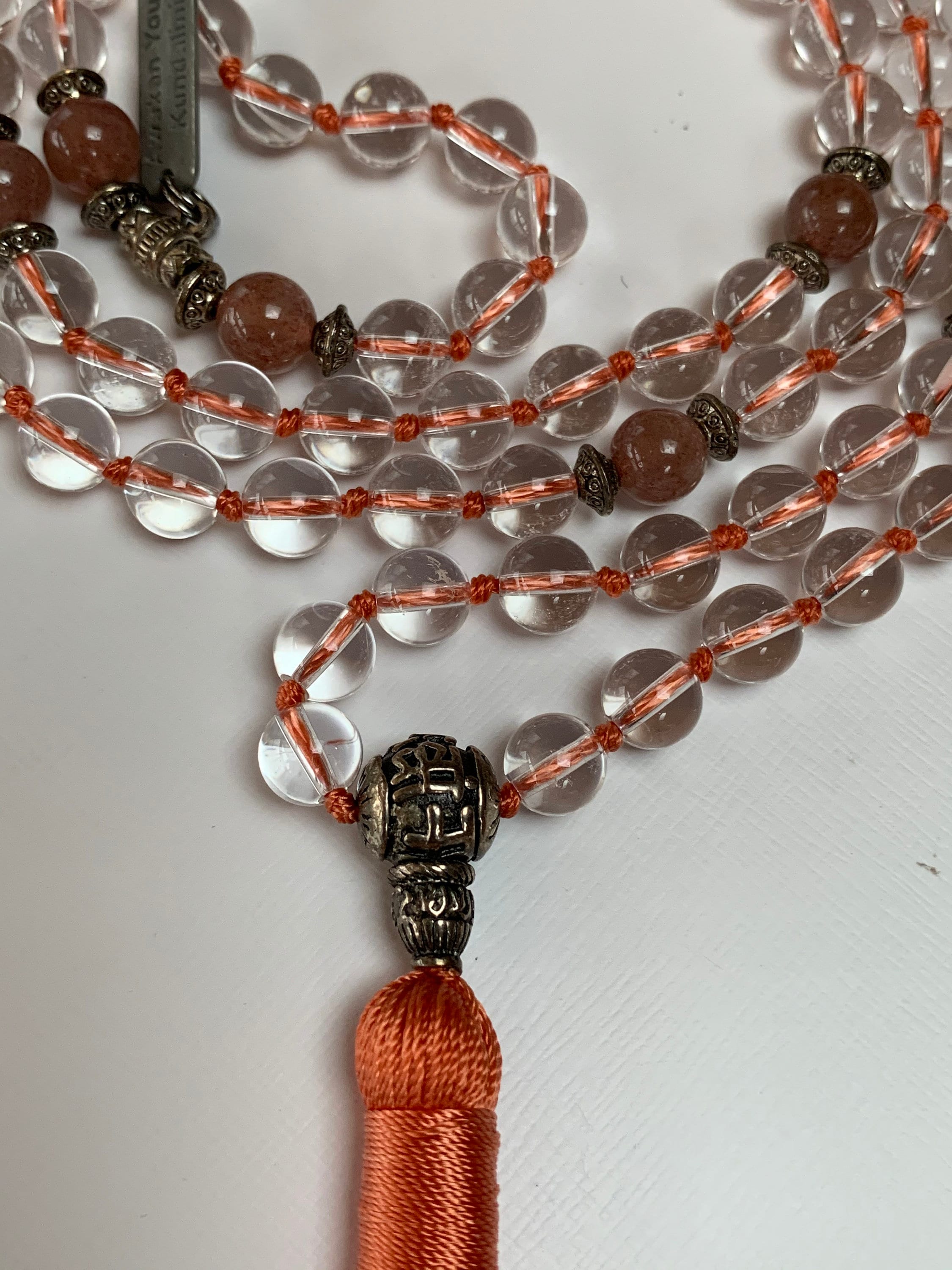 Quartz Crystal is a power stone. It is also called by different names like Saptik, Sphatik in Indian (Hindu) religion. It has been called the "Universal Crystal", and is the most recognized type of crystal. According to Astrology it is related to Planet Venus. It has the same qualities as the diamond and therefore it can be easily worn without hesitation. Wearing a crystal mala ensures a sound and undisturbed sleep. This Crystal Mala should be used to pacify the malefic effects of Planet Venus or to strengthen this planet in ones Horoscope. Quartz enhances energy by absorbing, storing, amplifying, balancing, focusing and transmitting. Quartz also enhances thoughts, as they are a form of energy. Quartz is a stone of clarity which dispels negativity and clears away negative energy. It can be used to purify and clarify on the spiritual, mental, and physical planes. Quartz enhances spiritual growth, spirituality and wisdom. It can also help particularly with concentration, studying, and retaining what one learns. Quartz is also a stone of harmony because it balances energies, and is even helpful in romantic relationships. Psychically, quartz is a powerful stone. It is used for protection because it counters black magic and protects from negative energy. Quartz is very useful on the third eye chakra for clarity of psychic vision, and can be used to communicate with spirits and other worlds. Quartz is a stone that can access ancient wisdom and bring it into the present. It is said to draw out pain. Quartz fortifies and strengthens all systems of the body. Quartz is reputed to be particularly effective for chronic fatigue, arthritis, bone injuries, depression, fibromyalgia, intestinal troubles. Clear quartz is associated with the Crown Chakra, but also works effectively to balance and energize ALL Chakras.

What is Strawberry Quartz?
This is a great stone to have as a companion, it is said it will lighten up thought processes and create a loving environment that encourages living joyfully in the moment, seeing the humour in all situations – what a priceless gift!

Strawberry Quartz strengthens and balances connections between the physical body and the aura, it also brings to the surface the hidden causes of current problematic situations.

It’s said it can lessen the restrictions you place upon yourself and make it easier to reprogram outdated beliefs. Meditating with Strawberry Quartz can stabilize an unbalanced energy field, and bring guidance to the Higher Heart.

It can also help one who is learning about past lives and astral travel, gathering information on
these endeavours. It can bring an expansive conciousness that imbues it’s carrier with wisdom. Although very
powerful, the vibration of Strawberry Quartz is quite gentle.

his rare form of Quartz is quite a stone to behold. The energy of strawberry quartz brings forth a powerful sense of vitality and balanced with a soothing sense of Universal Love. It is helpful to work with strawberry quartz when undergoing a spiritual crisis or when on a spiritual quest. For those who feel a need for constant contact, these strawberry quartz crystals are perfect for carrying in the pocket or purse, for regular access to these warm energies.

Meditating with Strawberry Quartz can stabilize an unbalanced energy field, and bring guidance to the Higher Heart. It can also help one who is learning about past lives and astral travel, gathering information on these endeavors. It can bring exciting new discoveries about the genesis of the Universe, and the calmness needed to assimilate this knowledge in an appropriate way, and turn it into wisdom. Although very powerful, the vibration of Strawberry Quartz is quite gentle.

I am so grateful for this beautiful piece. As soon as I unwrapped it, I felt it's beautiful energy radiating all throughout it. It feels amazing when meditating with it.