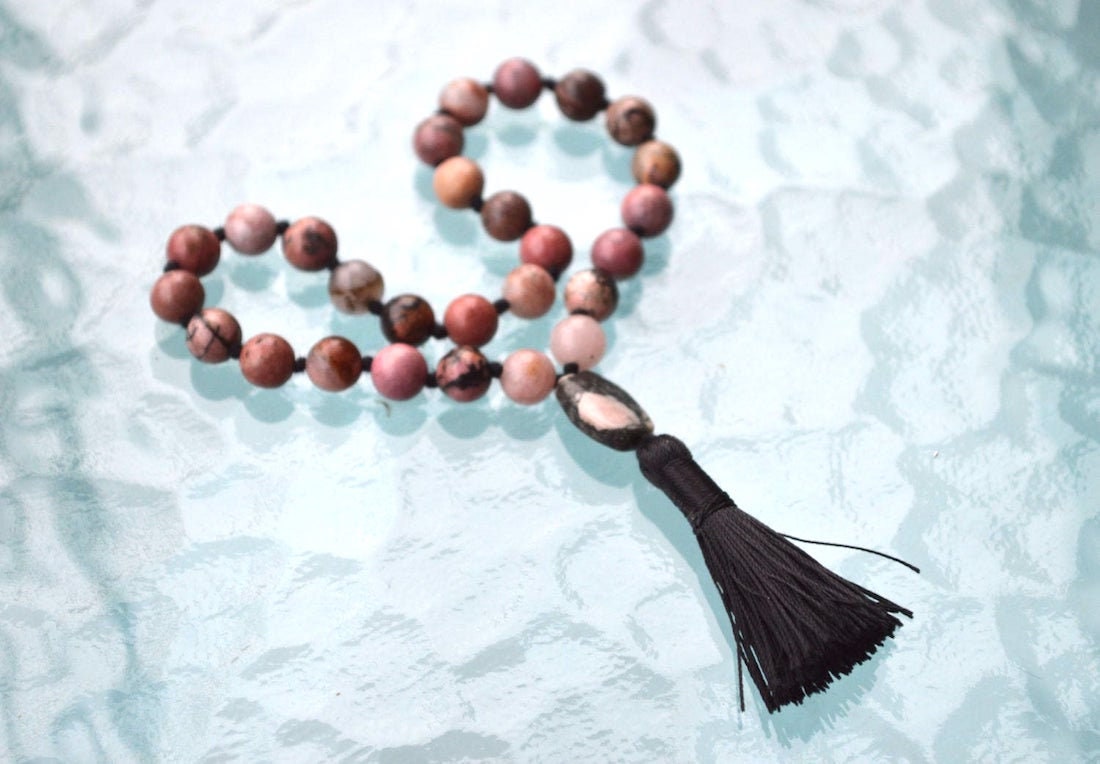 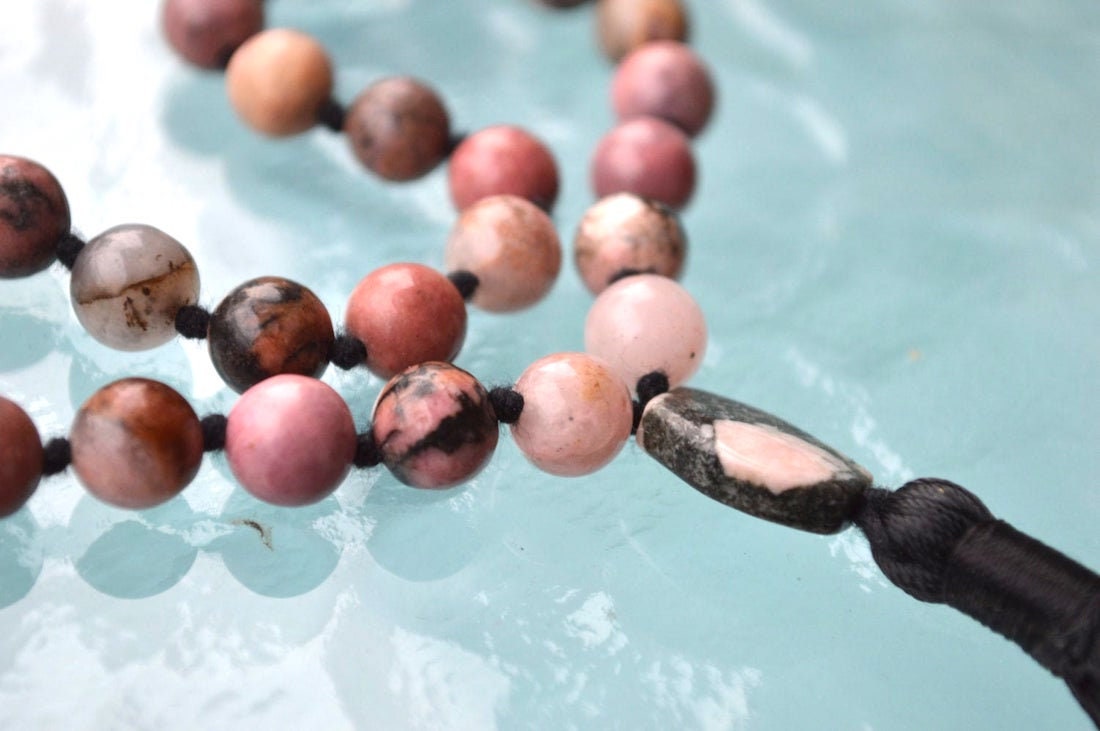 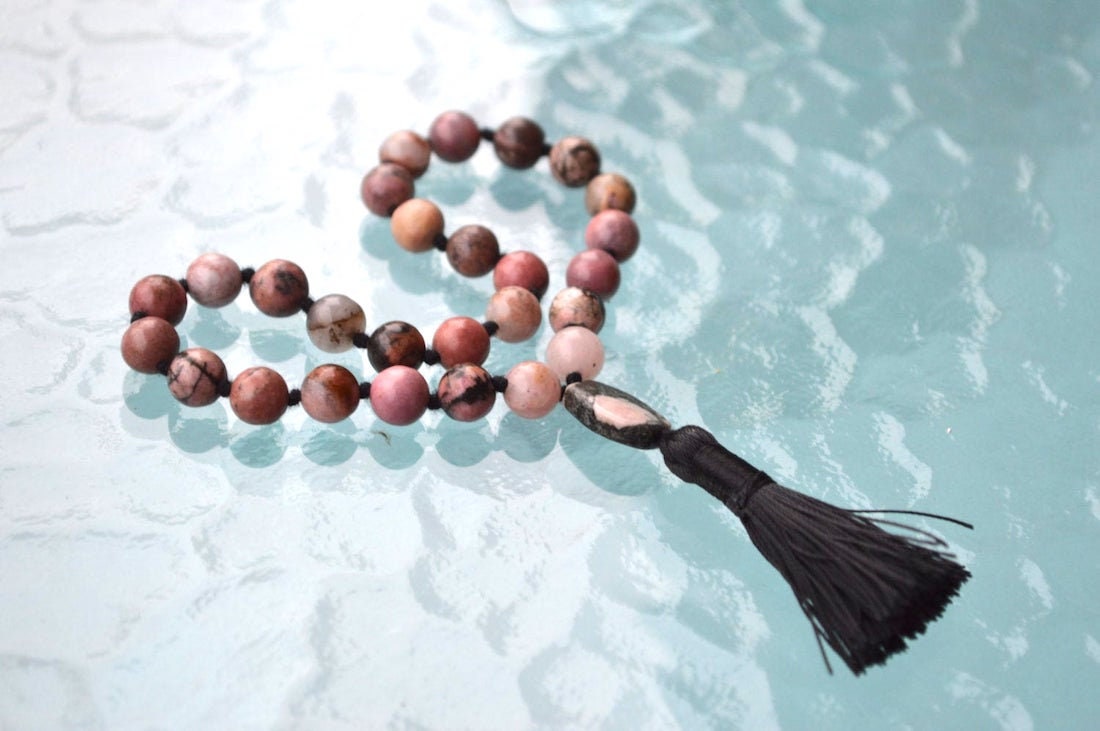 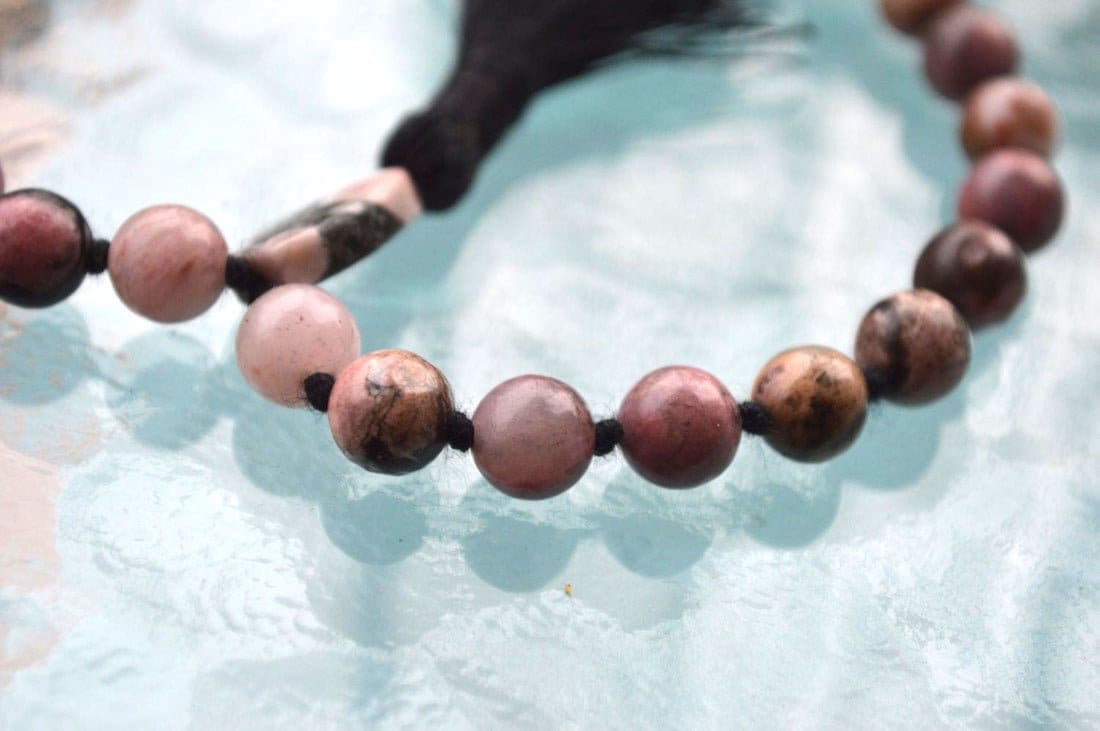 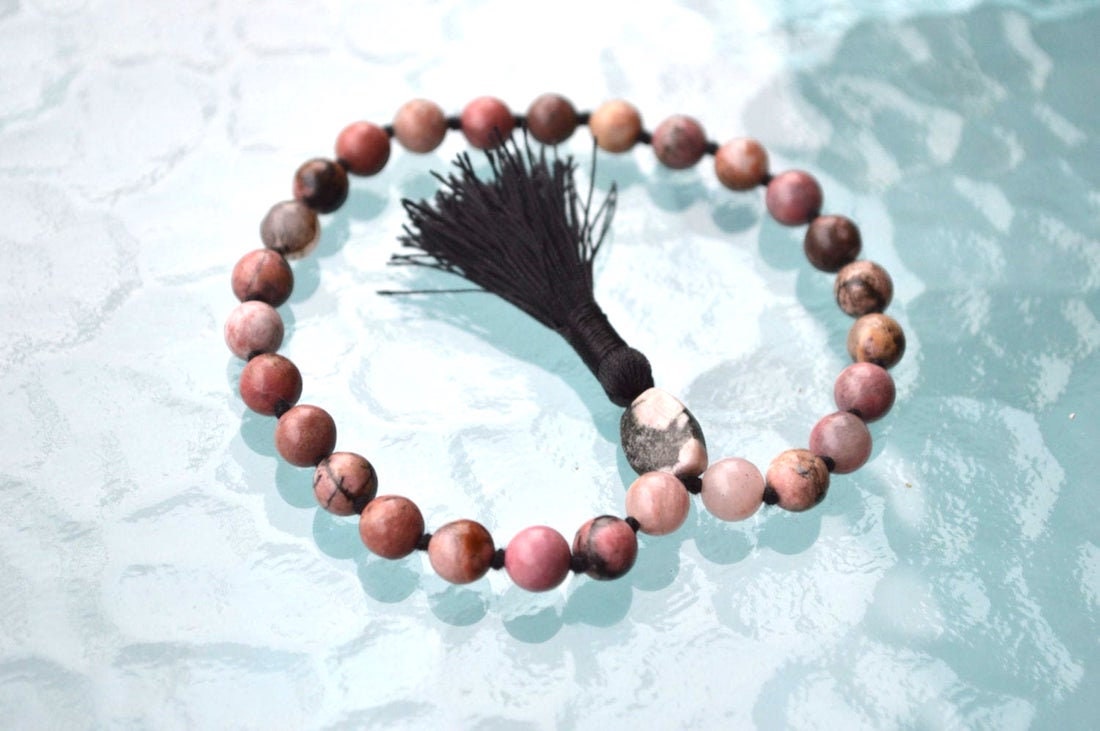 WHAT IS RHODONITE JAPA MALA?

Rhodonite is a stone of grace and elegance. Rhodonite teaches us about love. But rhodonite teaches not just about self love and the love towards others, but of all the important aspects about love. When to hold on to it, when to let it go and how to make that decision when things are at their worse.

Rhodonite cleanses the 4 top most chakras and allowing the energies to activate them.

If your job or family life has you going through more than your fair share of "those" moments where you have to have a LOT of understanding to get buy, carry a rhodonite in your pocket. When those moments arise, take a deep breath and rub the gemstone. It opens up a whole new level of understand and patience within you that can ease the tensions these moments tend to bring.

Do you often get caught in the middle, having to decide what the best course of action is for everyone involved? Often it is hard to find a solution that keeps everyone happy. Finger a rhodonite stone while thinking of the subject; it will help you find a unique solution that is fair and equitable to everyone involved.

This is an especially useful stone for anyone that has to be both mother and father to their children. It brings out the best, most loving attributes of both, just when they are needed the most and can help a father show love in situations it is needed or a mother be stern when tough love is called for.

Are you still suffering from the pains of love gone wrong? Add a rhodonite stone to your meditations and allow it heal the emotional scars and to allow forgiveness to bloom within your heart.

Have you recently suffered a severe cut, perhaps a surgery, where you know it will leave a scar? While the wound is fresh, add a rhodonite to the bandage to help the wound heal faster and to prevent it from scaring as badly.

If you have older scars that have already healed over, you can make an elixir by placing one or more stones in water overnight. If possible allow it to sit outside under the full moon. Then use the water to wash the wound each day to help smooth the appearance of the scar.

Anyone that has recently had a heart attack, major surgery, stroke and any other type of serious illness can benefit by keeping a rhodonite stone nearby. It helps the patient recover more quickly and can make the healing more complete or fuller.

Know as a rescue stone, the rhodonite can help to ease the pain of emotional trauma. Much like having a pair of nice strong arms wrapped around you, this gemstone makes you feel safe and secure. It also raises your self worth and helps to remove negativity from the situation which can ease the pain of the trauma.

Healers who work with unblocking and removing illness or injury from others can benefit from wearing one or more rhodonite stones because it prevents the negative energies from entering your body while you are working with the patient, allowing you to spend more time on them without fear of causing injury or illness in yourself.

Anyone suffering from emphysema or any other lung disease, or those suffering with throat infections or cancers can speed their recovery by wearing one or more rhodonites on a chain. Wear it up high, near the throat for throat problems or down lower, between the lungs for lung problems.

Vibrates to the number: 9